This China man was showing off his skills in Chinese calligraphy at a Chinese Arts & Cultural Exhibition near here recently. Not only was he giving a demonstration, he was also taking orders from people who wanted their names written in Chinese calligraphy. I don’t know how much each piece of art is but business was brisk.

This art form of writing Chinese characters incorporating Chinese elements of nature which includes the ever popular dragon, phoenix, sparrow and bamboo may be common in China but the locals were pretty fascinated with his creativity. 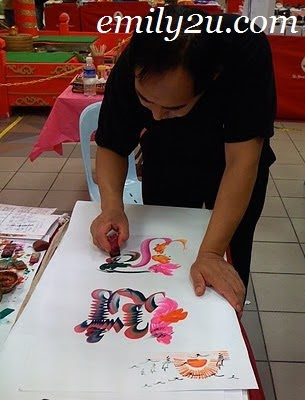 It’s moments like these that give me a sense of acute handicap in not knowing the Chinese language. As I grow older, I feel it more. And I only have myself to blame for screaming the house down after being enrolled in Ave Maria Convent and my parents gave in and got me transferred to S.R.K. Marian Convent.

It’s kind of funny that this was exactly what happened to my friend, KK, too. I remember him telling me that he was enrolled in Sam Tet Primary School and what a ruckus he made that his family held an emergency meeting and in the end, got him into St. Michael’s Institution instead.