It’s frustrating that even though I have not stepped out of my house for the past 2.5 months because I have to care for Snoopy since he fell ill and became bedridden at the end of May 2009, I keep spending money NON STOP. It would be understandable if one runs up expenses outside of the house but no, I can do that sitting at home.

First, Snoopy is running up bill after bill. I didn’t calculate exactly but it’s close to MYR1K a month just sustaining him, even in this condition. Heck, it’s way more than what I spend on myself in a month.

After my hard disk was damaged last week, and in the process, my pocket as well, the monitor of my family computer broke down. I was totally unsurprised since it is a really old monitor and I have been waiting for it to K.O. It’s just poor timing that it K.O.-ed NOW. I don’t want to spend more than necessary especially now when all I do the whole day is attend to Snoopy and play games on Facebook because I can’t concentrate long enough to put my thoughts together to work but oh, well, what to do but to change a new monitor. Without it, a computer is useless. LOL

As I have planned in case that monitor burns, I got myself a new screen and the one that I was using a 3.5 year old Samsung SyncMaster 793DF, a 17in CRT monitor, replaced the burnt one. Clever, huh? 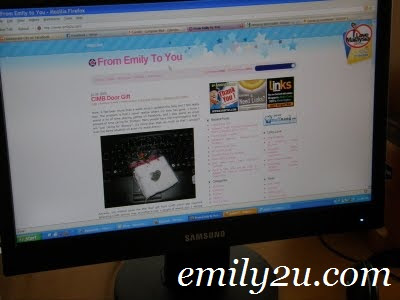 I went scouting for an LCD through the phone and in the end, settled for Samsung SyncMaster 2043SW 20in Widescreen LCD. It was a choice I made against Acer, LG, BenQ and Philips. That’s Ipoh for you! But then I have been satisfied with Samsung monitors all this while so it was an easy decision to make.

There are, of course, LCDs larger than 20in but I see no point getting one when I use it for work. A larger one would be too wide and distracting and would make me lose focus. Right now, this screen is just right for me to view three web browsers at the same time. Yes, I have to view three, sometimes four web pages at the same time because of work. Besides, a larger screen may require a better graphic card and at this point, I can’t spare the time running up and down to the computer repair shop.

I am happy with my purchase. At MYR435, I have to be. LOL I understand that although PC Fair will be in Ipoh from 14th to 16th Aug, 2009 at Stadium Indera Mulia, LCDs will not be on sale there. I couldn’t wait that long, anyway. My friend, Terrence, says that it’s rare that I am happy with something, anything. I say, “HIS HEAD RARE LAH!” Hahaha!