It is with regret that the first post of the New Year is something sad that I have to share. Trust me, I had every intention to blog earlier in the week but something or other came up and unfortunately, early this morning, Snoopy took his last breath and I MUST write this post before I could rest even though I have been up since 2am this morning.

Snoopy indeed suffered much over the past 7.5 months as he laid incapacitated in my room and even though I felt that I have done my best or at least tried to, at the end of the day, I don’t feel like I have done anything for him at all. I was helpless seeing him being frustrated trying to get up and walk and in the process hurting himself. I suffered along with him as I see him cry out but there was no sound.

While I was complaining that I was mentally and physically exhausted nursing Snoopy 24 hours a day through these months, and endless cycle of feeding him food and water, helping him to urinate and cleaning up his waste, and everyone was asking if we made the right decision to keep him whilst my friends were rooting for me to put him to sleep, it was just beyond us to do that.

Can you imagine the time I devoted to him these past months since he became bed ridden that I had only stepped out of the house once, and it was to purchase the LCD screen for my computer? I couldn’t leave him in this condition and I guess it’s not surprising since I have kept him since he and Dino were only 3 weeks old. I had to bottle feed them. Perhaps they didn’t benefit from their mother’s milk causing all these health problems but it’s self-defeating to keep questioning now.

No one would understand my feelings caring for Snoopy seeing his body riddled with pressure sores. I just counted this morning, Snoopy used up 30 bottles of RowaRolan, a very good antiseptic power for bed sores imported from Ireland. It works well, if only Snoopy wasn’t forced to lie on one side only.

Snoopy had been a darling pet all these years except for a few life threatening illnesses that caused me to lose a few years off my life span. This was the final hurdle that he was unable to clear. I guess I should be consoled that Snoopy lived for 15 years and 2 months, despite the final 7.5 months that, to me, had absolutely no quality.

It’s funny that while I was nursing Snoopy, I would fantasize about all the things that I want to do and all the places that I want to see. But now that I am free from this duty, I still don’t feel like doing anything at all or going anywhere. I guess I am just feeling empty. When Dino passed away suddenly on 6th June, 2008, I was depressed for a month. And then Snoopy began showing signs of aging and needed assistance. 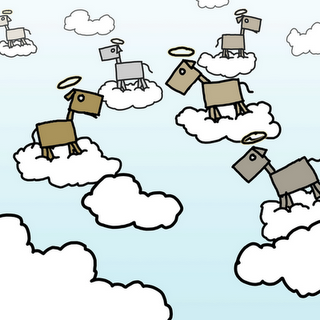 One other thing I am regretful about is that my dear Snoopy didn’t have the chance to wear the set of blue canine shoes that I bought for him which I thought would help him to walk better. Snoopy fell ill and became bedridden less than 24 hours after the shoes arrived in the mail. This morning, I buried the shoes with Snoopy and hope he will be able to show Dino how good looking he is with the shoes when they meet in dog heaven. Yes, I believe they will meet. Dino will be happy to see his big brother again. He wouldn’t be lonely anymore.

While it hurts me to lose Snoopy, I can’t deny that I heaved a sigh of relieve that Snoopy is finally freed from his incapacitated body which trapped his spirit. Now, after 7.5 months, Snoopy is finally able to walk again, just like the numerous dreams that I have had since he was floored by this final bout of illness.

Farewell, my darling Snoopy. And may you, finally, rest without pain.

2 thoughts on “Farewell, My Darling Snoopy”