I have only used the video camera of my Nokia E61i once and it was a capture of my dog pissing. I could not upload THAT video online as I had to safeguard his modesty too.

Coincidentally, I was at Ipoh Parade earlier this evening and managed to capture the last couple of minutes of this Christmas event at the concourse area of Ipoh Parade.

I was on the second floor shooting this video and come to think of it, I should have stayed on the ground floor for a clearer video but I would then have to try to avoid people’s head and backside.

Instead, what we get is this kind of fourth grade entertainment. Yes, I was truly entertained by these two out-of-shaped Santa Clauses who wore MASKS. Of course, we can’t see that on this video but they both had on pink masks with fake eyes and a cotton mat they call beard.

If you listen carefully, they were actually dancing to the tune of Boney M’s Mary’s Boy Child (Oh My Lord). It was very funny indeed and I am glad that I managed to catch this! 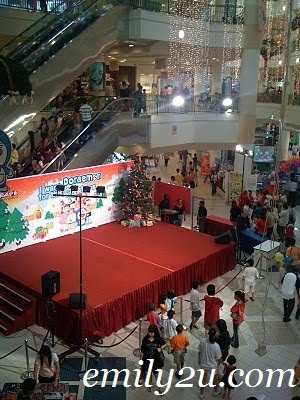 This picture of the stage was shot with the iPhone after the dance. You can see the huge difference in image quality. If the iPhone has video capabilities, I would have used it instead, or captured the video with a Nokia in one hand and the iPhone in the other!