I bumped into this mini Christmas performance by a Church group in Ipoh Parade three evenings ago. I wasn’t expecting anything special even though I knew before hand that there would be a three-day weekend Yellow Christmas Celebration with DiGi event so I didn’t bring along my Olympus. I did take a video of this performance with my Nokia E61i but the quality is too awful made worse by YouTube.

This church group produced a CD of Christmas songs which they were selling at the event for RM20 each. The audience was encouraged to support them by buying the CD, which was entirely made in Ipoh. The emcee also said that the producer did not sleep for a few days because he was rushing this CD out. Of course la, he should have started this project six months before Christmas. DUH! 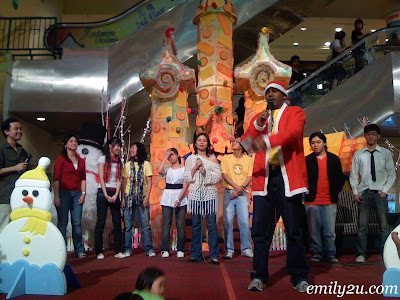 Anyway, I did not buy the CD. I don’t have any Christmas CDs or even Chinese New Year music CDs for that matter. These songs give me goose bumps. I do like Christmas pop songs, though, just not traditional ones like “Jingle Bells” and “Santa Claus Is Coming To Town.” 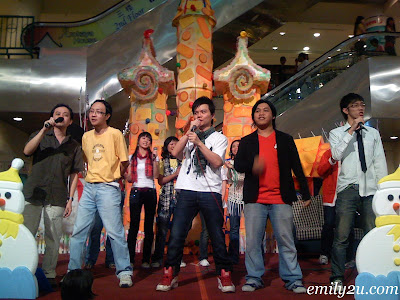 After this performance, there was a Santa Claus sit-in. Children 12 and below were allowed to make a wish and have their pictures taken with Santa Claus. This Santa was really “fake”. Too bad I did not have a photo of him because by then I already went upstairs. I say “fake” because although he wore a Santa Claus costume, he did not have a wig at all but just wore his typical Santa Claus cap and stuck beard on his face. Oh, and he did not have a belly at all, so unlike the Santa Claus that we have known since young and loved.

I have some other Christmas posts to write about and more Christmas photos to publish but I am not feeling too great right now. Let’s see if I have the mood to write more later.

One thought on “Yellow Christmas Celebration with DiGi @ Ipoh Parade”