Hah… I received a surprise year end package from Exabytes on 10th December, 2008. Ya., I know I’m late in my entry once again. SHRUG, what to do? I’m busy like hell and Streamyx isn’t helping with its crappy connection. 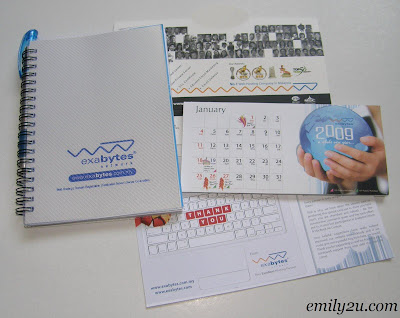 Anyway, like I said, I wasn’t expecting anything from Exabytes so I eagerly opened it and inside, it’s a notebook with a pen, a 2009 desktop calendar and a “Thank You” card. I actually don’t use this type of desktop calendars and as for notebooks, I already have plenty.

I thought it would have been a better idea to send us each a 2009 diary, instead of a notebook but hej, it’s free so I’m not complaining. Perhaps Exabytes could think about that for next year.