I was only in Singapore for a total of three days when I was visiting the island country last month. My, it was almost a month ago already, and yet, I still haven’t finished blogging about my trip to Singapore. And I haven’t even started on my tour of Johor yet. That’s coming up real soon, promise! 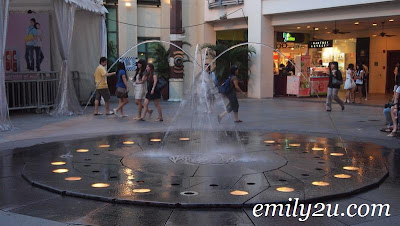 When I was in Singapore, I spent a lot of time indoors, or riding one vehicle or another. Still, I got to be on foot which was when I at least managed to get some decent photos of the island country. If you have been following my blog recently, you would already know of the places that I visited when I was in Singapore. 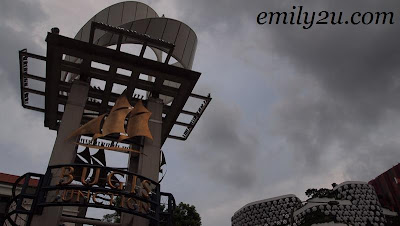 I actually went to Bugis Junction two times because of the convenience of the MRT station. I even spent a considerable amount of time checking out the bazaar from one end of the road to another, but couldn’t find anything that I liked enough to pay more than two times the price I would pay if I were to buy something similar in Malaysia. 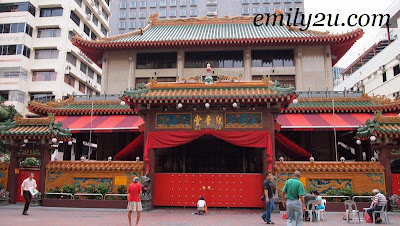 Just a short walk away, there is a well-known Chinese temple. I don’t know why but every time I travel, I just never have the luck to go in and make offerings to the deities. This time in Singapore, by the time I arrived, the temple was already closed. I think I was late by an hour. 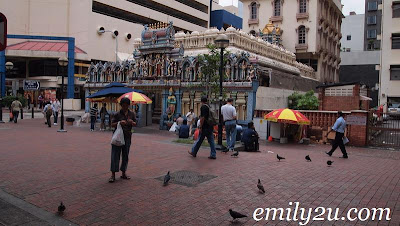 The Hindu temple next door was still opened, though, but I didn’t go in because I was not sure if I would be welcomed since not every temple allows non-Hindus to enter the holy place. I better not try and get chased out. It’s not a matter of embarrassment but I didn’t want to risk offending the deities. 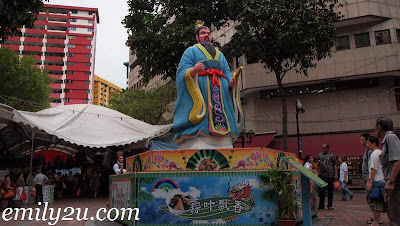 I spent “Chang Festival” in Singapore but the festival is not very significant to the banana me. I didn’t mind even if I didn’t get to eat the many types of “chang” (rice dumplings); I already had my share just before I left Ipoh, though. 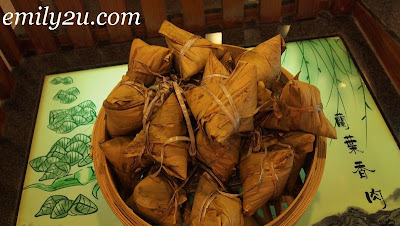 When I was planning this trip to Singapore, my friend asked if I would like to try swimming over to Sentosa Island. He’s just kidding of course, but even though I can’t swim, the distance is not far. This is the view of Sentosa Island with its newly developed landscape overlooking from VivoCity that’s on the main island. 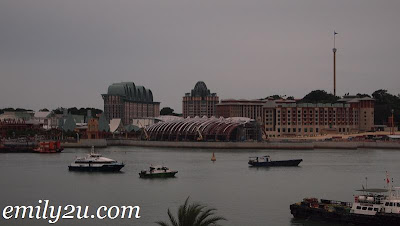 Whilst VivoCity is supposed to be an upmarket and modern shopping mall, they have this food court by the name of Food Republic that offers old school menu from the 50s to 70s. They have drink carts too like dim sum restaurants of the old days but prices were definitely not from that era!! 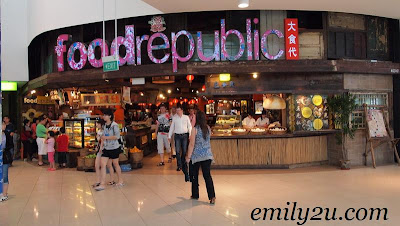 I walked out of the building (VivoCity) as soon as the rain stopped just to capture a photo of this black guy hanging on the “monkey bar”; I have no idea why he’s there. I guess he’s used to show the direction of the wind or something. LOL 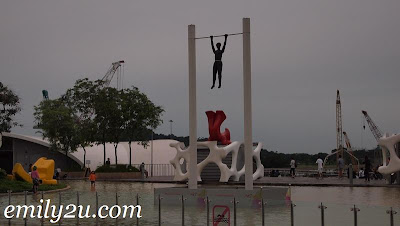 Going back to Sentosa Island where we had to pay SGD3 to reenter the island by shuttle train, I remembered to take a photo of this Universal Studios spinning globe before leaving for home. 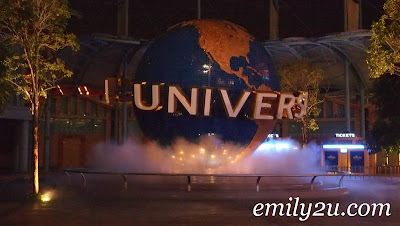 We were lucky enough to catch the Light & Water Show before saying goodbye to Resorts World Sentosa. Even though we had planned to spend a lot of time on the island but ended up shopping in VivoCity instead, it was a trip that was not wasted. The “musical fountain” saved the day! 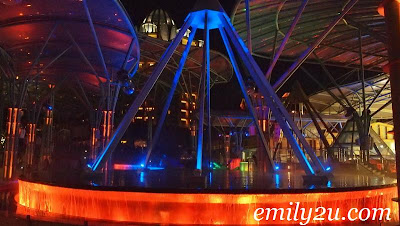 Will this post conclude my visit to Singapore? You will have to come back and have a read. 🙂

One thought on “Singapore Here & There”