When I was planning a trip to Singapore a few months ago, I really wanted to visit Universal Studios in Sentosa Island, Singapore. That time, it wasn’t opened for business yet so my friend suggested that we wait. We waited but between planning and actually being there, I made a big purchase and spent a considerable amount of money so much so that I felt that I didn’t want to spend anymore money.

A day pass to Universal Studios in Resorts World Sentosa (RWS) for an adult on a weekday is SGD66. That’s about MYR153 or USD48 IF you earn USD. Is that expensive? I don’t know about you but it’s quite pricey by my standards. Yeah, I know, I’m a cheapo. LOL

So anyway, we didn’t make any ticket reservations and just about went with the flow. On the day we arrived at RWS, tickets were all sold out for the day. Fine, the decision was taken out of my hands and I was OK with it. There were plenty of other things to see and do, or so I thought.

Actually, during the day, the place could be rather boring and like I said in my previous post, it was raining so we took the “free” shuttle out to VivoCity, which is a shopping mall on the main island. We had no idea that going back to Sentosa (which means peace and tranquillity), we had to pay SGD3 each. It’s not only transportation fare but also island entry fee. Oh well, we should have known nothing is free! 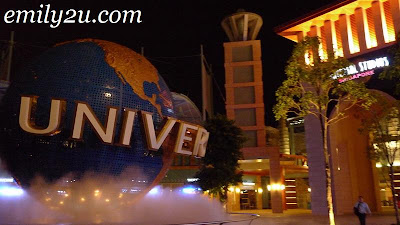 But all is not lost as there was, surprisingly, a Light & Water Show a short distance away. I thought that I saw a notice board saying such shows were only available on Thursday onwards. Since it was Wednesday, I thought that we had to give these shows a miss. Perhaps the notification was about some other shows. It was very dark during the Light and Water Show in Resorts World Sentosa Integrated Resort so much so I was quite surprised to see that there were hundreds and hundreds of people who sat on the steps to watch the show. Is this is nightly affair or what?

We managed to get part of the Light & Water Show on video in HD and I am happy to be able to share it here on my blog. By the way, I am not sure if this is the same as the Musical Fountain – Dance of Fire and Water Show that I read about online but enjoy, nevertheless!