The God of Prosperity has arrived!! It sounds nicer in Cantonese, right? 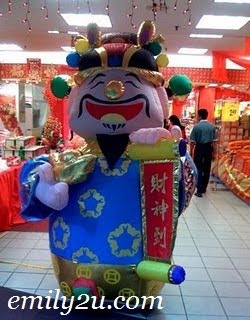 At first, I thought I would not be writing a Chinese New Year post because I have been under the weather for the past couple of days (blame it on the awful weather here in Ipoh) but now my fuzzy head has cleared a little and it doesn’t feel as heavy anymore so here is a customary Chinese New Year post. 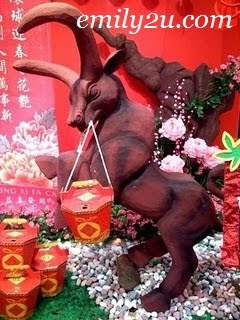 Over the weekend since Friday, I have been dropping by to Kinta City in the evenings to shoot some videos. On Friday, 23rd Jan, 2009, there was a double lion dance. I have watched plenty of lion dances already all these years and if you remember, I mentioned that we used to have lion and dragon dances at home on the first day of Chinese New Year as well.

But in the lion dance performance by this martial arts troupe, there was a drunkard lion, which I have never seen before. View my YouTube Channel for the videos.

Then on Saturday, 24th Jan, 2009, there was an acrobatic performance by an acrobatic troupe from China. One of the funniest moments was when one of the male acrobats likened himself to William Tell and asked members of the audience to hold a balloon on the head, with the mouth and even one guy had to hold it between his thighs. 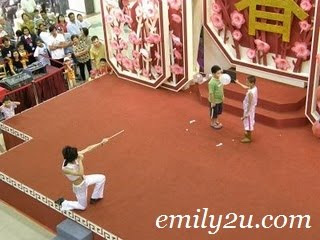 The acrobat would blow a dart from his blowpipe to hit and burst the balloon. In this photo, the acrobat was blindfolded and the boy, who was his assistant, rang an ice cream bell in front of the balloon to help the acrobat to focus on his target. Once again, I have these on video, which you have to click over to my YouTube Channel. 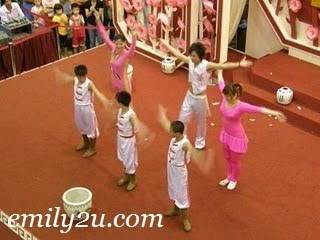 There is a performance as well at 8pm at Kinta City centre stage tonight but I have no idea yet what it would be. Stay tuned. And once again, Kung Hei Fatt Choy!!!