I am not following the Olympics as much as I used to. My father, however, was watching the Olympic torch relay in various Chinese cities on Astro the whole day. My mother asked me what is the mascot for this Olympics and I truly have no idea, without checking up on the internet. 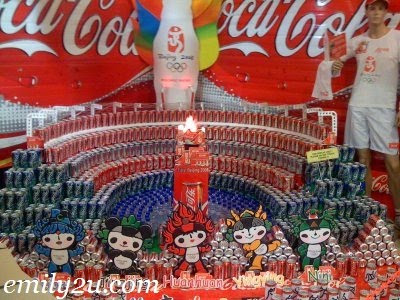 Coincidentally, I was at a shopping complex at night and they have this display sponsored by Coca Cola and there were the five mascots; five little boys and girls wearing animal costumes.

These five children are named BeiBei, JingJing, HuanHuan, YingYing and NiNi. BeiBei is in a Fish costume, JingJing in the Panda costume, HuanHuan represents the Olympic Flame, YingYing is in the Tibetan Antelope costume while NiNi is in the Swallow costume.

These four animals are animals native to China. In addition to that, they are in the colours of the five Olympic rings. What is most unique is that when you take the first syllable of these five names, you will get “Bei Jing Huan Ying Ni” which means “Beijing welcomes you”. I wonder how long it took the designers to come up with this concept but it is pretty unique in the history of Olympics.

For more information on what each child represents and symbolises, check out the website of the official mascots of Beijing 2008 Olympic Games.