During the late 1990s and early 2000s, I was heavily into shortwave radio listening. I actually discovered shortwave very early on, in primary school, but only had time to indulge and invest some money into the hobby in the late 1990s.

I was fascinated with the ability to receive international broadcasts over my radio and I guess, for shortwave radio hobbyists, even with access to the internet, the fascination is still there, especially when we discover a signal from a faraway broadcaster.

I no longer have time to tune into the stations anymore, mainly because the computer conflicts with radio airwaves but I know that when I retire, I will still go back to shortwave radio listening and by then it would be time to invest into new receivers. Right now, all I have left from my hobby are only three shortwave radio receivers and a large box of QSL verification cards. 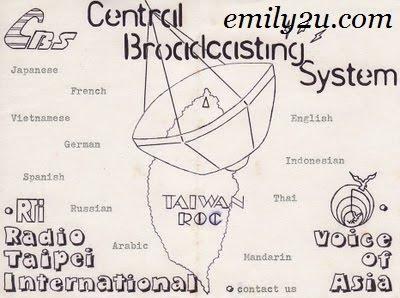 The other day when I was clearing out my drawers, I found this piece of paper which was my entry into a Homepage Designing Contest held by Radio Taipei International. RTI was one of the stations that I tuned into the most and in fact, was a reception monitor for them for a year and a half. When I started tuning in to them, they were known as Voice of Asia but subsequently underwent a revamp and emerged with a new name, image and brand.

It amuses me no end even today that this homepage designing effort of mine managed to win a prize, though I cannot remember what prize it was anymore, except that it was not the first prize. Anyway, back then, I only had dial-up internet access and was exposed to only a handful of websites.

I decided to scan this for keepsake. I get a kick out of winning contests especially those that require creativity. Those who know me personally know that I am not creative at all even though there’s the creative gene in the family! Some of my cousins and cousins don’t-know-how-many-times removed make a living through art! GGggrrr makes me geram that I don’t have any creativity!

One thought on “My Homepage Designing Effort”