I find that those photos with flash on did not turn out as well. And yes, this time, I managed to capture videos WITH audio after the blunder yesterday. I had to place the camera on the railing of the balcony for support to minimize handshaking which could make the video jerky but there were so many people who kept knocking and banging on the railing unexpectedly. Ah… spoilt my video.

Nobita and his cute antics

The second video is not that clear after I used the zoom, to avoid the heads of the people on the ground. I was at the first floor, but the first video is very clear. 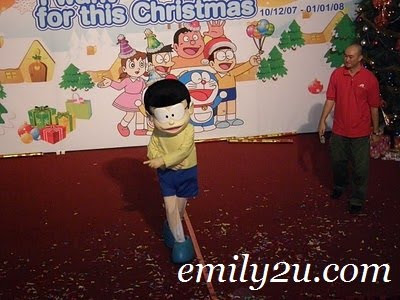 The third video, although is very short and the one that YouTube somehow cannot process, is priceless because our family friend, who works for Ipoh Parade, was also invited up the stage for the farewell speech, was dancing away. I won’t point him out though LOL

P.S.: Just when I was to publish this post, my blog server has to be down. F@rk!! Writing this post has really tested my patience 99. Argghh headache. Really vomit blood! Want to watch movie now already to de-stress!