I go to shopping malls almost daily that some people wonder if I must do the same if I were to live in the capital city, Kuala Lumpur. No, I’m not addicted to malling and I would rather stay home than be caught in traffic. Malling is just the kind of lifestyle for many Ipoh folks who are not into clubbing or don’t have to entertain kids in parks or fairs.

People also often wonder if I only go to Ipoh Parade and Kinta City. That’s not true. I go to all the malls, large or small. It’s just that most of the interesting activities and events are held in these two complexes basically because they have larger budget to play around with. 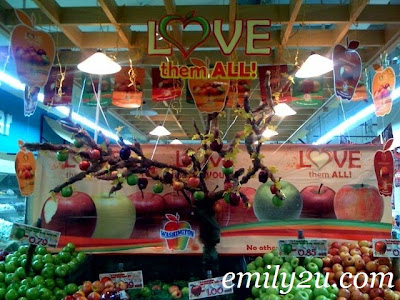 This photo of an apple tree was shot in a medium scale shopping mall called Greentown Mall. Although it’s not exceptionally unique, at least it’s something different.

A cousin used to work in a shopping mall as an artist so I know the kind of hard work these guys put in coming up with mall decorations to fit the season or product promotion. One has to be really creative so as not to use the same elements or concept all the time, though I believe that for larger companies like AEON, they do use the same design plan for all their malls each time. Friends from other states confirmed this.

3 thoughts on “Apple Tree in Ipoh”