Whoa, how time flies. It has been a WEEK since I blogged here! Eeekkk I’ve been totally distracted by something else and have not been blogging more than necessary.

Anyway, a couple of days ago, I went to two cemeteries to pay respect and offer prayers to my ancestors. It’s an annual ritual called “Qing Ming”. Loosely translated, it means “Clear Bright”.

The actual day of Qing Ming this year was on Friday, 4th of April but my family will always try to go on a weekend so that relatives from other States would be able to make a trip back too. On Saturday morning, 5th of April, we had to first go to a cemetery near Ipoh to pay respects to my paternal great grandparents and grandfather and then proceeded to another nearby cemetery to offer prayers to my paternal grandmother.

At first, I was not sure if I wanted to join my family but then I thought I might as well go since Qing Ming is but once a year, though we also go to pay respects to my paternal grandmother on All Soul’s Day on 2nd November yearly. Besides, about three weeks ago, I had a vivid dream of my late grandmother and I think she tried to communicate with me. 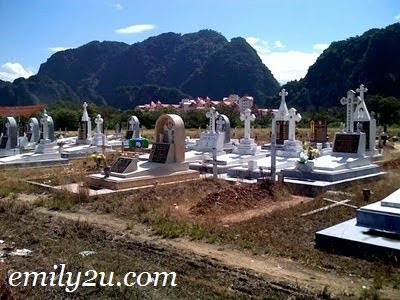 When we were there, there was hardly anyone around at all except for people who work there. These places looked absolutely deserted and lonely. I took these photos with my Apple iPhone and I was not able to focus at all as the sunlight was strong and reflected on the screen. Still, I think I got pretty decent shots here.