Chey…. I submitted this photo below to The Star’s Thumbnails in mid-February, 2008 but till today, I did not see it published. 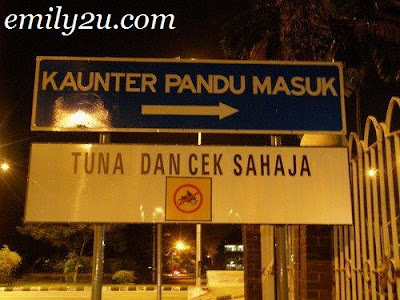 Just like my earlier submission, Defiant, it has been left on the wayside while the Editors think that some other photos are better, like this cat. People who are online long enough would have received a photo of this cat over and over again in their inbox. And here’s still SOMEONE who has never seen it before. Hah!

Anyway, I found my photo really hilarious. This photo was taken at the junction leading to the drive in counter of the Municipality Hall in Ipoh. Obviously, it used to say “TUNAI DAN CEK SAHAJA” but with the “I” missing from TUNAI, it carries an entirely different meaning. So, we can now pay our assessment with tuna and cheque. My father told me to photoshop the word CEK to KEK. Hahaha don’t want lah! So free meh?

Oh yeah, I swear I will not submit another photo to Thumbnails again since they are so action. I publish my photos on my own blog better 😛