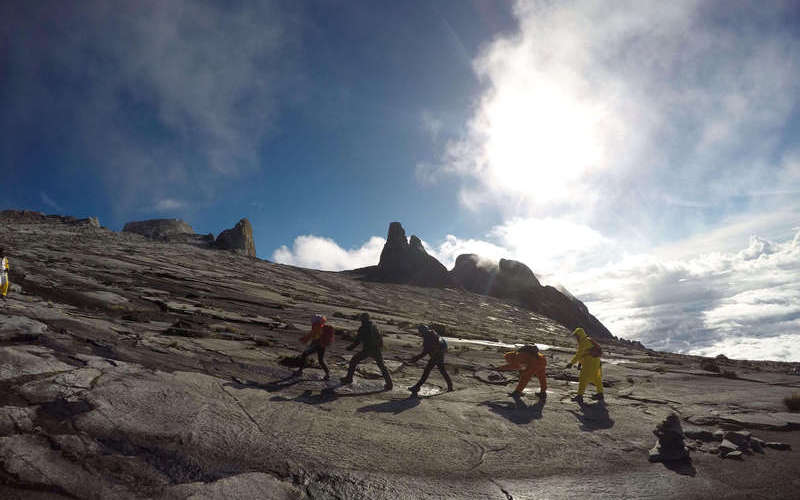 While the common idea of a holiday for most people is to board a plane to fly to a faraway destination or at least go on a road trip, for 26-year-old Syaza Adilah Mohamad Roslan, her break from work is best spent on a mountain. The freelance writer from Selangor, who is known among friends as simply ‘Adela’, had always been an adventurous person, probably stemmed from her student days as an active Girl Scout, but it was only two years ago that she was bitten by the mountain bug.

“Strange as it may sound to non-climbers, I see the world through mountains. I have often been asked what I actually see in a dense forest and how different is one mountain from another. It is the process of ascending a mountain that opens my eyes to how magnificent our forests are – the multitude shades of green, orange and yellow of the leaves and trees. Sometimes, it got me thinking how a giant rock could be in the middle of the terrain. I marvel at the sandy beach that I come across deep in the jungle. These are the encounters that are highlights of my climb.

“There is a saying that the peak is bonus, but descending is mandatory. On the mountain, we all need to walk because the only time we see the helicopter is when we are close to death. A mountain traveller needs to break a sweat because every view, every peak is earned. Summits make all the terrorising ascending dramas worth the effort. To witness how the birds watch us from nearby mountain peaks gives me an incredible feeling,” Adela attempted to explain her passion.

Having committed herself to the hard core hobby of mountaineering, Adela got herself into a mission of ascending one mountain a month and in the process, climbed a total of 48 mountains in 2016, conquering the G7 (7 highest mountains above 7000 feet) in Peninsular Malaysia. “Some of my trips covered more than one mountain, so it was an opportunity for me to do more than what I had planned. There were trips that bagged me more than one peak due to their locations. Some climbers do not get too much time off work, so they participate in trips that take more mountains at one go. Personally, these trips save me time and lower my costs,” Adela said.

Coming from the success of #Adela1Month1Mount, Adela gave herself an even greater mission to accomplish this year, with #Adela50Mountains. Only into the second quarter of the year, she has already ascended 34 mountains and counting. It’s not a joke when Adela says she seems to be spending more time in the jungle than out of it.

For Adela, who usually signs up with mountain climbing groups she comes across on Facebook and Twitter, getting prepared for each climb is the most important part of mountaineering. “My usual routine before a trip would be to check my first aid kit to restock pills and medication. Also, recheck common gears such as gloves, shoes and particularly haversacks to make sure that they are in good condition. Most of all, I study the trail from blogs and logs as well as gather information from friends who have climbed that mountain. Stepping into the woods, not only do we need to carry essentials in case we got lost or injured and we only have ourselves to depend on, knowledge is mandatory,” Adela couldn’t stress enough.

While there are numerous mental and physical challenges to overcome, Adela, who has so far “only” climbed in Malaysia, Indonesia and Japan, believed that tropical rainforest mountains are some of the toughest to ascend due to their structure and trails to reach the peak. “Climbers of these mountains face countless of hills and false peaks before they earn the tops. The routes are always in ‘W’ shapes, which make us hike up for hours just to descend and then ascend again. Sometimes, these are the same routes that are used by wild animals. Thus, we need at least one guide to lead us on the right trails. Good guides can read the trails and markings. They know how to detour and if necessary, clear vegetation and make new markings for future climbers. Another main challenge is the weather. It contributes to our torture because when it rains, nothing turns out well during the climb. If it is too hot, it dries us up like salted fish,” shared Adela.

Nevertheless, all these obstacles are no deterrents to Adela, even when she got lost in the jungle for two hours and ran out of ration while conquering her first G7 in Peninsular Malaysia, Pahang’s Mount Yong Belar or caused her to be hospitalised due to heat stroke. She is steadfast in her #Adela50Mountains mission for now, with the toughest challenge being Mount Semeru, an active volcano located in East Java, Indonesia. Standing at 3767 metres, it is the highest mountain on the island of Java.

“One day, when money is of no concern, I would like to ascend Mount Everest. One could dream, can’t she?” Adela mused.

Looks like there is no mountain too high for Adela, who stands at only 151cm and incidentally, suffers from acrophobia!

Note: An edited version of this article [Climb every mountain] was published on 22nd April, 2017 in the now-defunct The Malay Mail.

One thought on “Climb Every Mountain”