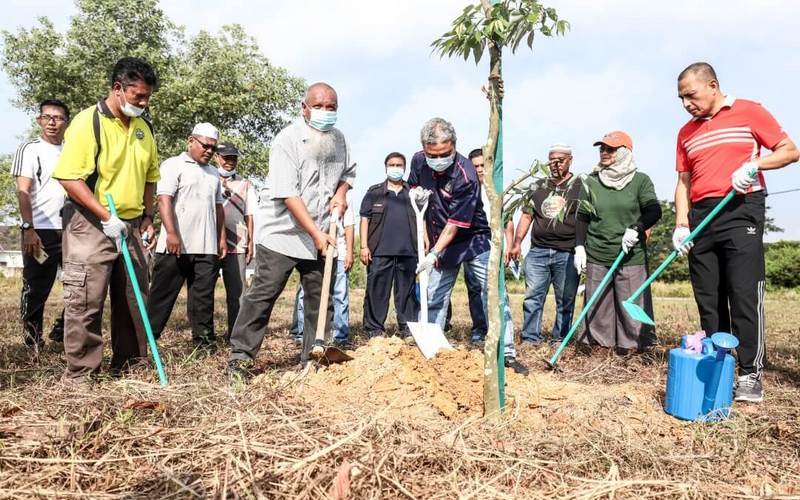 Rancangan Perkampungan Tersusun (RPT) Pengkalan Permai has been recognised as a model settlement scheme in Ipoh, by the Ipoh City Council (Majlis Bandaraya Ipoh – MBI). This accolade was for the communal teamwork of landowners and residents who jointly kept their respective areas clean.

Dato’ Rumaizi praised the residents for their high compliance rate of the Program Pematuhan Pembersihan Lot Semak-Samun Sendiri (Kendiri) (3P3S Kendiri), of which Encik Ahmad has been the driving force behind this worthy endeavour.

The mayor reminded residents that keeping the area clean is not solely the responsibility of the City Council as all have a role to ensure that their home and its environment is always tidy and well kept, for the comfort of the entire neighbourhood.

The 3P3S Kendiri programme is to create awareness among the public, especially owners of vacant lots or abandoned houses, as a reminder of their responsibility in keeping their property in order, and to make cleanliness a culture. Since the implementation of 3P3S Kendiri, the rate of compliance following notice of bushes removal on privately owned lots has increased from 50% in 2014 to 80% from 2015 onwards.

Keeping the vicinity cleaned up reduces the incidence of dengue infection, untoward incidents with wild animals such as venomous snakes, as well as minimise service costs for the City Council. This on-going method of involving the community (Community Engagement and Empowerment) is the mainstay of the “Way Forward Programme” in line with the new normal and practices in changing the mentality of Ipoh residents in maintaining the cleanliness of their respective areas.

Dato’ Rumaizi added, “If everyone behaved like residents of RPT Pengkalan Permai, I am confident that Ipoh would be the cleanest city in Malaysia.”

Setting up a WhatsApp Group for RPT Pengkalan Permai on 20th June this year has been very effective. Out of 79 lot owners, 22 of them have duly cleared their land without notification from MBI. This cooperation is welcomed and should be emulated by all parties, especially other settlement schemes or new villages, so that Ipoh is Clean, Safe and Comfortable for everyone.