One of the few places that I visited when I was on a 9-day holiday at the end of March earlier this year was Putrajaya, the federal administrative centre of Malaysia. I actually was supposed to visit it at the end of January but unfortunately, something came up at the last minute and I had to give it a pass.

Looking back these photos of Putrajaya, my trip seems so long ago. It was like a dream. I thought that I took quite a few photos but I only found four that are good enough to be published. So sad! 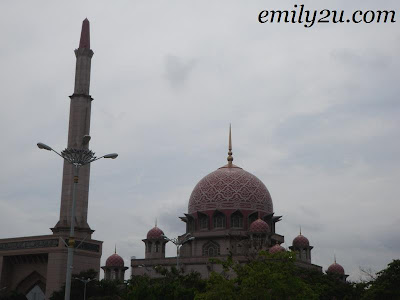 This is the main mosque in Putrajaya, right smack in the middle of the “city”. Yes, Putrajaya is like a toy city. It reminded me of Social City, a Facebook game, where on a normal day, you hardly see anyone at all except for workers; gardeners, sweepers or guards. 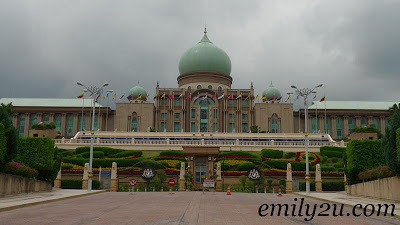 This is the Prime Minister’s Office, one of the more colourful buildings in Putrajaya. The sheer size of the building where our Prime Minister works is very impressive. I also like the well-kept garden. From afar, it looked like not even a strand of grass was out of place. Of course, we didn’t go too near since we had no business with the Prime Minister! 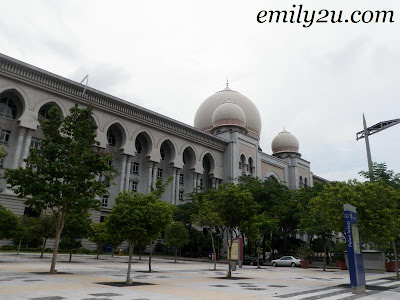 This is Istana Kehakiman or Palace of Justice. It is one of the more majestic buildings in Putrajaya. Well, it probably is so because it has a name to live up to! Driving around Putrajaya passing by so many huge buildings left me wondering if there really are so many people working inside them. Buildings like these could easily house thousands of employees! This is Putrajaya International Convention Centre or PICC in short. It’s so huge and sits atop a hill, one can never miss it. We didn’t drive up but let me tell you, the people who were standing by the side of the Convention Centre looked like ants to us. Yes, that’s how high up they were!

One thing I noticed about Putrajaya is that it’s colourless. Buildings are either in brown or stone grey. Maybe these are the colours that require the least maintenance but this just makes it so difficult to distinguish one building from another. One could easily get lost in the city! One tip though, fuel up before heading to Putrajaya!