In my previous post, I said that I would drop by Ipoh Parade to check out what activities they have arranged for Chinese New Year. Unfortunately, they did not arrange anything at all yet except for Choy Sun (God of Prosperity) walkabout on various afternoons at 2pm and Pat Sin (Eight Fairies) walkabout at 2pm on 28th Jan, 2009.

From their event highlights, it looks like they will only have a full day of events this Saturday, 31st January, 2009 from 12.30pm to 8.30pm and Sunday, 1st February, 2009 from 2pm to 8.30pm. So if you are looking for something different, you know WHEN to head over to Ipoh Parade. 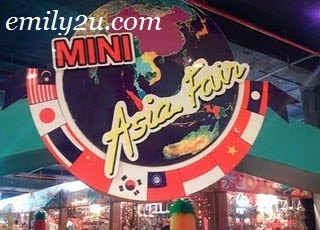 The old spot where the Thai Fair was held is now a Mini Asia Fair. I think that the organizers have undermined the intelligence of Ipoh folks. What is the meaning of closing one Fair only to open the same a week after? And what is the meaning of declaring that this is a “Mini Asia fair” when all they have are just various flags of Asian countries when the participants of this mini Asia Fair are exactly the same as those who were there during the Thai Fair? 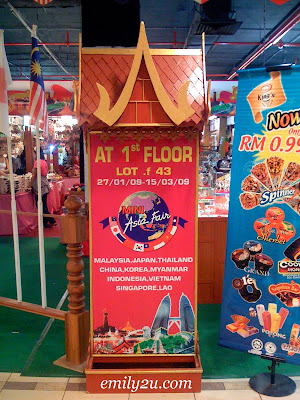 Do they think that by displaying just a Korean national costume and selling some cheongsam and Japanese crackers, that the countries of South Korea, China and Japan would have been represented in this Mini Asia Fair already?