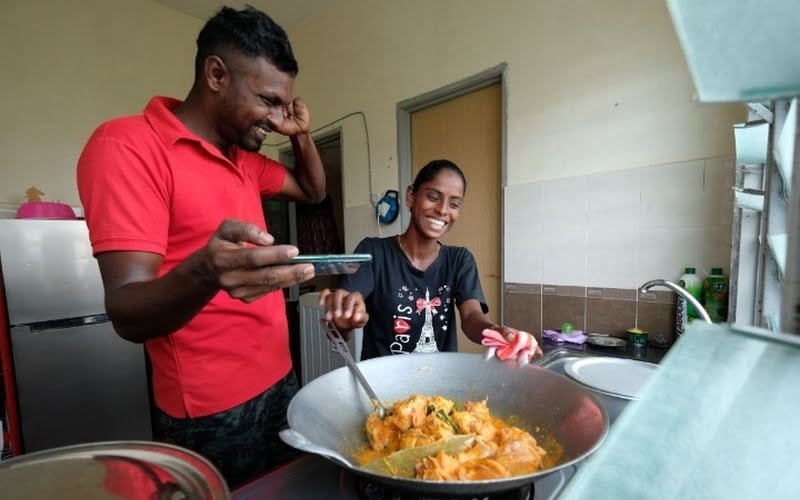 The current situation around the world has led to a raft of bad news, stories and tales of woe.

Just last month, the popular Restoran Kok Thai in Ipoh has seemingly closed for good, taking away one of the great eateries to partake in our city. Despite this blow to our local restaurant scene, two Ipoh residents have been turning the present circumstances to their own advantage, and have unwittingly become internet sensation across the world.

YouTube began to feature videos uploaded by a user called ‘Sugu Pavithra’, cooking a variety of tasty dishes whilst speaking in fluent Malay. The hunt was on to find the popular culinary content creator, and when the mystery was finally revealed it led right back here to Ipoh.

Pavithra is the lady in the videos, a housewife who is occasionally assisted by her husband, Sugu. From their opening dish of grilled tilapia, they received around 5,000 subscribers, and very quickly that figure began to rise to a whopping 399,000. That led YouTube to get in touch and now Pavithra receives a monthly income in American dollars.

“My first dish was grilled tilapia and I spoke Malay throughout the video,” she told The Star after the news got out. “In just four days, I managed to get 5,000 subscribers on my channel and then I received an e-mail from YouTube to become their partner.”

Malaysian culture is increasingly well known worldwide, and the appeal of the videos is possibly her presentation in the Malay language, as well as the assortment of delicious dishes on display. Fans have flocked to the site, which is no surprise given the notability of Malay culture in all corners of the globe. Malaysia’s rich food heritage delights travellers from around the world, with so many exquisite dishes that are as varied as the Malaysian culture itself. The fusion of many different cuisines is part of the appeal, which is also part of the wider charm of Malaysia as a tourist destination.

Such is the interest in the videos that reputable Japanese YouTube star Ichang has even started following the couple’s recipes, recently uploaded a video of herself replicating their curry chicken recipe, as reported by World Of Buzz. That has further helped to build the Ipohite’s magnetism, increasing interaction with their content. The popularity has been further proven by the number of viewers interacting with the channel, with comments which give the mother of two great encouragement.

“The most interesting and motivating part is when many viewers left positive feedback and asked us to continue doing this. Some of them also requested Indian recipes, which is really exciting,” she said. Pavithra and her husband have won many hearts, including Prime Minister Tan Sri Muhyiddin Yassin, who showered the family with practical gifts to outfit their kitchen.

As movement restrictions around Malaysia begin to ease, and the lives of citizens return to almost normality, lifestyle may never be similar for the YouTube sensation, Sugu Pavithra, whose videos continue to go from strength to strength. Through all the trouble and bad news, it is refreshing to hear of one positive story emerging from the Great Lockdown.

To keep up with all the latest news and reviews from Ipoh make sure you pay regular visits to this blog.