Those of you who know me personally know that I have two beloved doggies, Snoopy & Dino, whom I have kept since they were three weeks old. I know there aren’t that many friends and zero family members who even know of my blog. Still, a month ago, I wrote a post dedicated to Snoopy and it’s high time I write a post dedicated to Dino too. They are brothers and I love them both equally so I have to be fair.

But how does Dino look like? I don’t think I will ever publish their real photos online and I am going to protect them like I protect my own photos 😀

Last evening, I was at a place that was selling plants and decorations for Chinese New Year and I saw this dog that looks exactly like Dino when Dino was younger and slimmer. 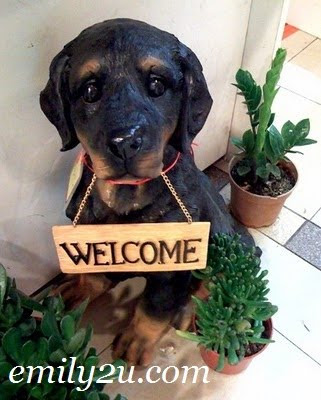 If only my Dino would sit still for a moment and pose like this!

If you don’t already know, Snoopy and Dino were born in early November, 1994 and that means they are already into their fourteenth year. Last year, when Snoopy was ill and had to undergo some medical tests, one of his medical reports stated his age as 108. That is simply freaky. If he was 108 a year ago, I wonder how old he is now. And Dino would be the same age as well.

If you are wondering why I always mention “Snoopy & Dino” and never “Dino & Snoopy”, it is because Snoopy is older by minutes 😀