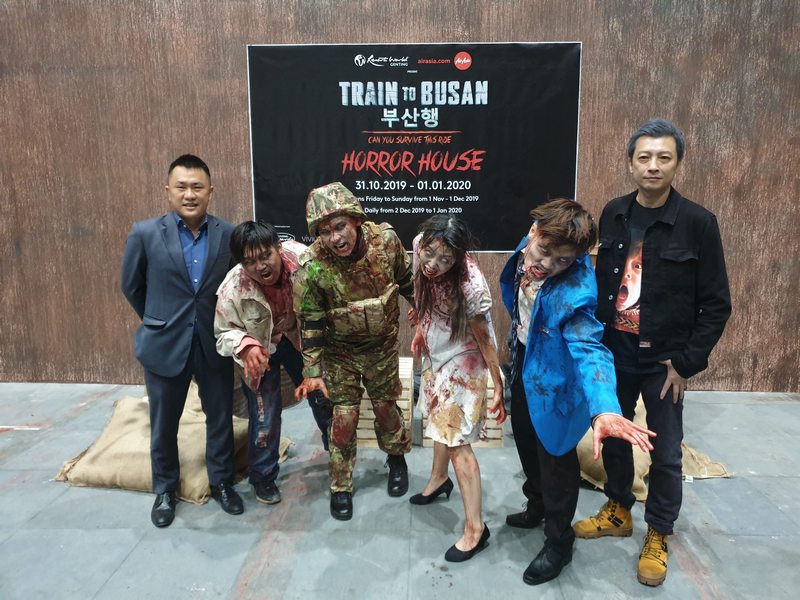 The Train To Busan Horror House experience at Resorts World Genting (RWG) is about to open its doors to fans of the movie plus fans of scare experiences in Malaysia and the region. The first-of-its-kind in the world, the Horror House launches on 31 October 2019, bringing the world of the blockbuster Korean movie to life in a unique and thrilling way. This event is brought to you by Resorts World Genting and AirAsia as co-presenter.

“This isn’t the first Halloween spectacular that we’ve created at Resorts World Genting, but I believe it is certainly the best,” said Roger Ong, Assistant Vice President of Entertainment and Events for Resorts World Genting. “As the leader of entertainment experiences in Malaysia and the region, we have always tried to push the boundaries of what we can offer our customers.

A collaboration with Vividthree, a digital content production powerhouse from Singapore, the Train to Busan Horror House experience is a superlative result of what location-based entertainment technology can achieve. Drawing from Vividthree’s feature film experience – which included the Singaporean box-office hit trilogy Ah Boys To Men and the Hollywood animated movie Robotropolis – Vividthree has managed to create a compelling horror experience that it considers its crown jewel. How was it made? The production team from Vividthree took us behind the scenes to show how the magic of the Horror House was created.

Behind the Scenes
Partnering with the Train to Busan IP owner, South Korea’s Content Panda, the Horror House experience utilised the latest in digital and virtual reality technology to create a scary experience that has to be experienced to be believed. No expense was spared in the creation of the Horror House which was faithful to the movie, and also expanded on its plotline.

The team at Vividthree first began by watching the movie – which is one of the highest-grossing South Korean movies ever – over and over, identifying areas and scenes that were suitable to be expanded and translated into a physical experience. This, according to Vividthree, was a huge challenge as the team wanted to be faithful to the motivations of the characters and also allowed for new possibilities.

“We asked ourselves: what we would do if we were one of those ordinary, everyday Koreans that somehow got caught up in a zombie apocalypse? What would have happened if we made a different choice in those scenarios, compared to what was done by the movie’s characters,” said Jed Mok, Chief Executive Officer for Vividthree. “It was really fun to brainstorm over what could be done and how we could expand the universe. But it was also a huge challenge, as working with a successful IP like Train to Busan is a daunting task, not least because there are so many fans around the world who love the movie.”

The team decided on setting the Horror House in the 48 hours that ensued after the finale of the movie, asking the questions: what else was happening in Seoul, Daejeong and Busan, and what could have happened to the remaining survivors? Using hints left by the movie director, over 50 concepts were refined into the final product, brought to life through a mixture of live actors, digital technology, brand new videos and immersive soundscapes. Through close consultation with Content Panda, the universe of the movie had been dramatically and faithfully expanded; fans of the movie can expect to spot many Train To Busan original movie experiences, while still offering a frightful time for those unfamiliar with the film.

“The Train to Busan Horror House experience is broken up into several parts, each with a unique offering inspired by the movie,” explained Roger. “When visitors first set foot into the experience, they are teleported to a busy, neon-lit street in Seoul, where some of the best Korean street food will be available. After buying a train ticket, they will then enter into a ravaged train station, centred on a wrecked train that crashes through the second level of the station, pining innocent passengers and hungry zombies under the rubble.

“Visitors will then get to walk through two Horror Houses. The first is made up of retail shops in the ruined Daejeong Train Station, and the second is in the abandoned train itself. But beware, you won’t be alone! After the Horror Houses, visitors can then move to the Base Camp area to engage in action-packed activities either as a survivor or zombie. Every different zone offers a different level of fun and scares, and each one will be fantastic in its own way.”

Creating the Horror House
The Horror House would be heightened with a cast of 50 actors and scare point operators, who were meticulously selected for necessary physical attributes and acting skills. Working in shifts, the acting cast – who are all Malaysians – would play the role of zombies and survivors in shifts, bringing the storyline crafted by Vividthree to life.

The attention to detail going into the cast and costuming was immense; led by an award-winning Malaysian artiste, the makeup for individual actor took up to 2 hours to complete, while the costumes had been styled specifically to be recognisable to fans of the movie.

The preparation for the Train to Busan Horror House took months to finalise, covering art direction, set design, prop theming and technical considerations that brought the world to life. Each aspect of the experience came with its own challenges, and the team at Vividthree had been careful to accurately capture the atmosphere of the movie, using custom audio soundscapes and video assets to heighten realism.

The haunting mirror maze, for example, drew inspiration from the 2008 movie Mirrors and the final fight sequence of Bruce Lee’s Enter the Dragon, creating a disorienting room full of broken reflective surfaces and creepy mannequins. The VR zombie shooting game – available at the Base Camp area – took things further by allowing guests to assume the role of Korean army soldiers, defending the Busan quarantine zone from an army of ravenous zombies as seen in the finale of the movie.


“I’m astounded by the amount of detail and attention that has been poured into the Train to Busan Horror House. This is the result when Resorts World Genting works with the best and brightest in the industry,” said Roger Ong. “It’s been a fascinating journey, seeing how this experience has evolved from inspiration to concept to storyboard to the actual Horror House. We are incredibly pleased to open our doors and invite you inside to become part of the movie.

“The Train to Busan Horror House checks all the boxes of what we strive to achieve at Resorts World Genting – it is unique, it is cutting-edge, and it showcases how we are using Virtual Reality to push the envelope of entertainment. We also see this as an opportunity to promote South Korea itself, by working with brands to bring the true soul of Seoul into the experience. I am confident that we have achieved our goal of scaring the living daylights out of our guests. And I promise that this is the beginning of great things as we aim to create even more dynamic experiences in the years to come.”

The Train To Busan Horror House experience will be accepting passengers from 31st October, 2019 to 1st January, 2020, running from 12 noon until 10pm on Fridays, Saturdays and Sundays between 1st November to 1st December, 2019; and daily from 2nd December, 2019 to 1st January, 2020. The Streets of Seoul runs from 10am ’til 10pm over the same time period.

Tickets to the Horror House are priced at RM90 for regular admission (RM80 for Genting Rewards Club members). A combo Horror House single admission and Skytropolis Preview Pass is available at RM128, and guests looking at skip the queue can opt for an additional Express Pass at RM30. For more information, log on to www.rwgenting.com or call +603 2718 1118.

Note: View larger image by clicking on it once this page has completely loaded.