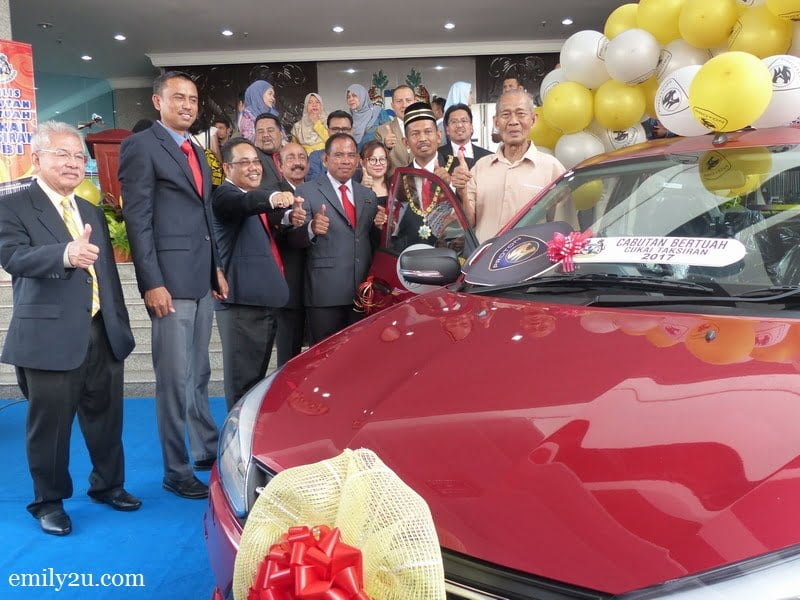 After almost an hour of drawing the names of lucky winners for 28 sets of prizes, it was down to two participants who have yet to win a prize. On the line were a Modenas MR1 motorcycle and the grand prize of a Proton Saga 1.3MT. Who wins what? It was such an intense moment, we could literally hear the heart beats of the two ‘finalists’.

When the Lord Mayor drew the second last name from the box to declare the winner of the Proton Saga, he said that the winner’s name ends with a ‘H’. Who is he??? Apparently, both men have a name that ends with a ‘H’! So, to give us another clue, the Mayor said that the name starts with an ‘A’. What are the chances of both men having a name that begins with ‘A’? It’s very slim, obviously, but that was exactly what happened at the Ipoh City Council yesterday morning!

After a heart-stopping minute, the winner’s name was announced as Ariffin Abdullah! What luck for the retired octogenarian! The widower who lives by himself has five children and eleven grandchildren. He plans to gift the prize to one of his children as he is happy to continue moving around town on his trusty bicycle, having no driving or motorcycling licence in his name.

Ariffin and the Modenas MR1 winner, Ang Ah Bah, were two property owners who settled their assessment rate in full by 28th February, 2017. In total, there were 75,600 who qualified for the lucky draw, out of 290,000 bills issued. This was a 15% increase compared to the same period for 2016.

Thirty names were drawn in the first round on 20th March and they were then invited to a grand prize draw at the Ipoh City Council yesterday morning to determine the winner of the red Proton Saga 1.3MT. Other prizes given away in the draw included four units of motorcycles, five bicycles, household electrical appliances and furniture.

This annual lucky draw by the Ipoh City Council is to motivate property owners to settle their assessment early and in full. Ipoh Mayor Dato’ Zamri Man said, “We are encouraged by the 15% increment this year and hope that this trend continues with each coming year. Our lucky draws are to show appreciation to our ratepayers for their prompt action in settling their bill in full and on time.”

Some 35,000 people paid their assessment in full as early as the first week of January. These early birds walked home with fridge magnets.